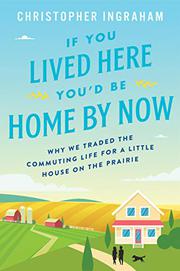 IF YOU LIVED HERE YOU’D BE HOME BY NOW

A Washington Post data reporter debuts with an account of his move from the D.C. area to a rural county in northwestern Minnesota.

In 2015, Ingraham published a dismissive comment about Red Lake County, Minnesota, and the immediate social media reactions from some people there prompted him to visit. When he got there, he realized that he was falling for the place. He convinced his wife that they should move there for a while. It was a great place, he thought, to bring up their twin sons, still of preschool age—not to mention quite a bit less expensive than D.C. So they packed up and moved, where they were, again, surprised to discover how comfortable they felt—even though Red Lake “is a place so lacking in superlatives that proclaiming itself ‘the only landlocked county…that is surrounded by just two neighboring counties’ is the closest thing to a boast that you’ll find on the county’s website.” Seldom is heard a discouraging word in Ingraham’s text; the only time he really complains, which he does in a light, even ironic way, is about the local food, especially the pizza (barely edible). The family quickly adapted to the entirely new small-town culture and found everyone welcoming and even sort of Mayberry-ish. Ingraham deals with a number of fundamental issues: health care (things were farther away than in the densely populated East), schools (he had a great experience with the local school dealing with one of his sons), social life (his wife won a seat on the town council; he went deer hunting), and, of course, the extreme cold of northern Minnesota. The author devotes a small section to politics, registering his belief that mass-media portrayals of small-town rural America are not sufficiently nuanced. Throughout, Ingraham writes with the conviction of one who has found—as least for him—tranquility and truth.