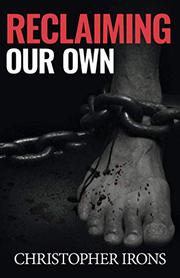 In Irons’ debut thriller, a former soldier and his fellow Army Rangers face off against a group involved in a string of child abductions.

Brett Moore and his wife, Riley, are ready for a visit with Brett’s brother, Ethan, and Ethan’s family. But their rendezvous at an ordinary American mall takes an unexpected turn when a fire alarm goes off and Brett spots someone running off with his 2-year-old nephew, Cameron. His pursuit becomes a scuffle with multiple assailants, and both Brett and Cameron wind up as abductees. The FBI, anticipating a ransom demand, is on the case, most notably agent Wade Scott, who served in the Army with Brett. Feds learn of other missing children, and Wade has startling information for Riley: Brett’s time with the Rangers included a particularly violent incident. To escape his current captivity, he may have to resort to a darker side of himself and, therefore, not return as the same man Riley married. Meanwhile, Brett befriends Gwen, one of his captors whose young daughter is also a hostage. She can free him of his restraints, but he’ll still have to track down Cameron, with whom the kidnappers have fled. Brett has his Ranger brothers for help against a long list of baddies, some of whom are crooked law enforcers. While at first glance this has a typical kidnapping plot, Irons gradually develops a mystery. For example, there’s much more behind the abductions than ransoms, and not every villain is immediately known. Characters are likewise multidimensional, from sympathetic Gwen to the protagonist, who, as feared, becomes more vicious and bloodthirsty. The author’s succinct, unadorned prose makes for brisk action scenes, which include more than one capable woman, although the Rangers are exclusively male. The story does, however, falter in the villains’ motivations. While their ultimate goal is perfectly clear, some things are harder to understand, such as why they abduct one character’s wife as “leverage” without letting the husband know they’ve taken her or what they want from him.

A fast-paced, suspenseful story notwithstanding the somewhat perplexing villainous plan.