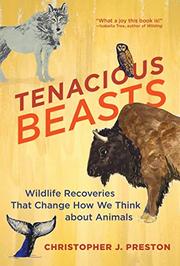 Wildlife Recoveries That Change How We Think About Animals

Many animals headed for extinction are recovering nicely, writes science writer and teacher Preston, who delivers a satisfying account of a dozen successes without minimizing the difficulties involved. He opens with news that four foxes entered British homes over recent years and bit their inhabitants. These victims aside, most people celebrate the fact that British foxes (and American coyotes) are thriving in suburbia. The author also discusses bears, wolves, bison, bobcats, bald eagles, and many species of whale. Formerly slaughtered as pests, food, or merchandise, they are flourishing—so much so that humans will have to adopt different approaches and ethical attitudes and exercise tolerance and a conservationist mindset. Traveling the world, Preston interacted with researchers, activists, and Indigenous people working to restore animals to their former ecosystems, most of which now contain far more humans than before. Some—whooping crane, California condor—were on the verge of extinction. Others remained plentiful but through hunting (beavers) or technology such as dams (salmon), have disappeared from huge areas to the detriment of the environment. North American rivers without beavers become dysfunctional, and their biodiversity plummets. Salmon support a complex food web in their upstream spawning grounds that vanishes when dams shut them out. As Preston shows in this page-turning account, many iconic animals are extinct where they roam freely because they breed with domestic animals. That includes American bison, which interbreed with cattle. Ongoing captive breeding programs aim to produce a genetically pure species, and because farmers and ranchers often hate predators and “pests,” returning animals require permanent and expensive conservation efforts featuring stricter laws, anti-poaching enforcement, insurance, subsidized fencing, and ongoing political and activist pressure. Some readers will note that Preston confines his enthusiasm to prosperous North America and Europe. Conservationists are working hard in Africa and Asia, but there is apparently little to cheer about.

Rare, well-delivered positive news about animals and the natural world.