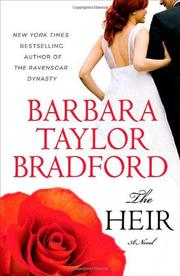 Second in the Ravenscar trilogy (after The Ravenscar Dynasty, 2007) draws more tortured parallels between the über-rich Deravenel clan and the Plantagenet and Tudor monarchs.

After wresting control from the Lancaster Deravenel-Grants, Edward “Ned” Deravenel is firmly at the helm of Deravenels, the family’s global trading company, and, like any effective totalitarian, he’s restored a modicum of peace to the organization. On the surface, his amply staffed households, including Ravenscar, the family’s ancestral Yorkshire castle, run smoothly. World War I has just ended, and Deravenels forecasts an even more profitable peacetime. But beneath the opulence is the reality: Ned’s beautiful wife Elizabeth is an enervating shrew, but an alluring one—witness their ever-increasing brood, including the obligatory male “heir and spare,” and level-headed elder daughter Bess, the designated alternate heir. George, Ned’s younger brother, is a dissolute lout who runs up gambling debts and embarrasses the firm. Ned manages to contain these threats, until Elizabeth tars his family with vicious gossip, and George claims to be the true heir to Deravenels. Elizabeth is easily cowed, and George is exiled to the Burgundy branch of Deravenels, where, like his Plantagenet predecessor George, Duke of Clarence, he’s done in by killer wine barrels. Edward succumbs to a heart attack, and youngest brother Richard becomes conservator of Deravenels until Edward’s heirs reach majority. Emulating his avatar, Richard III, he exploits his regency to launch a corporate bloodbath. Edward’s young sons disappear while fishing off Ravenscar’s cliffs. And tramping Ravenscar’s grounds, Richard runs into serious trouble. Bess, meanwhile, agrees to cede her birthright to her husband, Henry Turner (aka Tudor), scion of the supplanted Deravenel-Grants. Cut, vertiginously, from 1928 to 1970, with only cursory mention of interim cataclysmic events. Harry Turner, analog of Henry VIII, still can’t get a divorce.

MASTER OF HIS FATE
by Barbara Taylor Bradford
Fiction

SECRETS FROM THE PAST
by Barbara Taylor Bradford
Fiction

LETTER FROM A STRANGER
by Barbara Taylor Bradford
Fiction