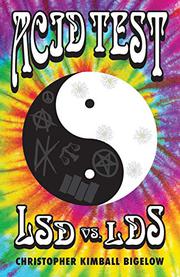 A memoir discusses morality and the Church of Jesus Christ of Latter-day Saints in the 1980s punk scene.

One might not associate Salt Lake City with the counterculture, but in the mid-’80s, the city boasted a punk scene awash in drugs, sex, and rock ’n’ roll. It was in this milieu that Bigelow (The Latter-day Saint Family Encyclopedia, 2019, etc.), fresh from high school, began to move beyond the good-and-evil morality of his upbringing by “middle-range Mormons.” Borrowing from the tabletop game Dungeons and Dragons (Bigelow’s preferred means of escape during his early adolescence), the author adopted the philosophy of chaotic neutrality: “In D&D, neutral basically meant selfish—I did what I needed for my own comfort, but I didn’t hurt others for evil purposes, and I didn’t conform to some one-size-fits-all system of good.” What was so bad, after all, about casual sex, recreational drug use, and some minor theft here and there? Then, under the influence of LSD and Stephen King’s post-apocalyptic novel The Stand, Bigelow began to probe the unseen world—and he didn’t exactly like what he found. One night, after an INXS concert, drunk and on speed, the author suffered a strange encounter: a violent, angry attack that he called “a disturbance in the Force.” The experience forced Bigelow to confront a larger question: Did evil really exist? And was he better off as a member of the Church of Jesus Christ of Latter-day Saints than as an unaligned hedonist? The author’s prose is conversational but steeped in its own cleverly outlined philosophy, as here where Bigelow describes the guilt he felt from stealing from his roommate: “After he left for work, we packed our stuff into cardboard boxes, including Scott’s combat boots and several records. If possible, we would’ve taken his TV, stereo, and other stuff too. As we drove north, I felt a little guilty. Had we crossed the line from chaotic neutral into chaotic evil?” While the author is an able storyteller with plenty of colorful anecdotes, his interest in morality provides a unique ballast in what would otherwise be a typical but entertaining tale of adolescent mischief. His evocative depiction of the time and its subcultures helps to make this a memorable and ultimately quite surprising autobiography.

A roaming, rambunctious account about rejecting society—and then embracing it.