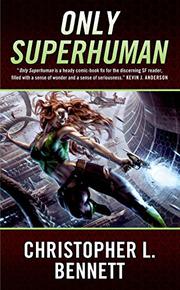 By 2107, following a war, Earth banned genetic and cybernetic experimentation on humans. Not so in the Asteroid Belt, where flourishing space habitats continue to develop highly modified humans. Emry Blair is a Troubleshooter, one of a band of such enhanced humans who consider themselves the embodiments of the superheroes pioneered by the classic comics of the 20th century. And they act accordingly, being given to foolhardy exploits and vainglorious banter as they perform their self-appointed task of defending the solar system against the other, rival societies of modified humans, many of whom have uncompromising and violently destructive ideologies. But then Gregor Tai of Ceres takes over the Corps, with the idea of not just reacting to threats, but preempting them by judicious assassinations and military strikes. The Troubleshooters grumble but go along. But then Tai orders Emry to infiltrate the Vanguardians, a rival superhero organization led by Eliot Thorne, who’s been sulking in the Outer Belt for 30 years and now has plans to unite all the mods, even the unruly and violent ones. Since Emry’s related to some of the Vanguardians, she’s ideally suited to the role. But Thorne and his daughter, Psyche, are more formidable and persuasive than Emry bargained for, and she soon finds her loyalties wavering. The main plot’s padded out with “origin” stories detailing Emry’s personal evolution from scapegrace to defender of humanity and bouts of enthusiastic sex. You will have gathered that this is, indeed, an adult-ish comic book minus the illustrations. Proceed accordingly.

Should satisfy the demographic but not too many others.