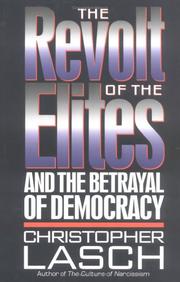 THE REVOLT OF THE ELITES

And the Betrayal of Democracy

A sure sign that Lasch's latest (and, sadly, last) book deserves wide acclaim is that it will infuriate those who cling to conventional notions of left and right. Lasch remains as relentless a critic of liberal progressivism as he is of unfettered capitalism. In many ways, this sharp and penetrating study culminates his career as a social critic of the highest order. It's an articulate challenge to the anti-democratic notions of both market and statist liberals: Both, in Lasch's view, share an exalted sense of the professional and managerial class, thereby diminishing a vital middle class in this country. Throughout his many books, Lasch (The True and Only Heaven, 1991) notes, from his early work on liberals and the Russian Revolution through his biting analysis of self- styled radical intellectuals, he has always concerned himself with one overarching question: Does democracy have a future? More so than his earlier, often naysaying books, this wonderfully vigorous and urgent set of essays makes explicit Lasch's hope for a renewal of our best democratic values: the civil arts of public discourse and debate; an educational system that stresses commonality, not difference; and, quite simply, religion—one of the best disciplines against professional arrogance. For Lasch, to accept our inability to master a God-given world is the first step to a more realistic vision for humanity. The course of our century, as he argues with great historical nuance, has steered us from a sense of the ``common good.'' Our public spaces continue to dwindle, and the language of politics, journalism, and the academy no longer invites the average person into the argument, as democracy once promised. The ``democratic habits'' of ``self-reliance, responsibility, and initiative'' have degraded into a mad rush for social mobility. The common wellsprings for a civil society- -families, neighborhoods, traditions—are now seen as impediments to financial success or as oppressive representatives of sexism and racism. This brave piece of social criticism answers Lasch's critics with a message so simple and obvious, it's sublime. (First serial to Harper's)