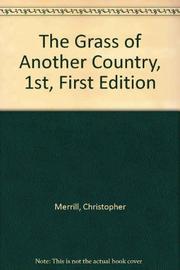 THE GRASS OF ANOTHER COUNTRY

A Journey Through the World of Soccer

An engaging journey through, as poet Merrill puts it, ``the enchanted lands of soccer.'' When, in 1990, the US team qualified for the World Cup for the first time in 40 years, Merrill (an avid amateur soccer player) followed the team through preliminary games stateside and then to Italy for the month-long tournament. The Americans were 500-1 underdogs, given little chance to do more than make a brave showing, especially with Bob Gansler at the helm, a coach so conservative and defense-oriented that his own players had sworn to scrap his game plan. In the opening game, Merrill says, Czechoslovakia ``outclassed'' the US in ``skill, speed, strength, tactics, and creativity,'' but in the second game—largely through the play of New Jersey goalie Tony Meola—the Americans scored a moral victory against heavily favored Italy, to whom they lost by only one goal. The third game, though, against Austria, was an ugly loss marred by ineptness and fighting. As Merrill progresses through the World Cup play (finally won by West Germany in a brutal match against defending champion Argentina, signaling the imminent downfall of superstar player Diego Maradona, whose drug and prostitution connections would bring him to disgrace and banishment), he offers lovely and knowing passages on the art, architecture, and ambience of Italy's cities and provides deep historical background and understanding of the game of soccer itself. Of particular interest are his insights into why ``the world's most popular game'' has never caught on in sports-mad America. The rarity of goals, Merrill contends, has ``doomed'' soccer in a country ``hooked on instant gratification'': Americans want to see lots of scoring but, ``like poetry and jazz, soccer is a subtle art, a game of nuance.'' An intelligent and literate work that could broaden American interest in soccer in time for our 1994 hosting—for the first time ever—of the World Cup.