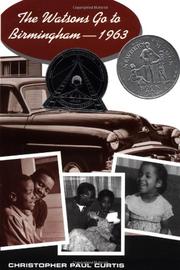 THE WATSONS GO TO BIRMINGHAM--1963

Curtis debuts with a ten-year-old's lively account of his teenaged brother's ups and downs. Ken tries to make brother Byron out to be a real juvenile delinquent, but he comes across as more of a comic figure: getting stuck to the car when he kisses his image in a frozen side mirror, terrorized by his mother when she catches him playing with matches in the bathroom, earning a shaved head by coming home with a conk. In between, he defends Ken from a bully and buries a bird he kills by accident. Nonetheless, his parents decide that only a long stay with tough Grandma Sands will turn him around, so they all motor from Michigan to Alabama, arriving in time to witness the infamous September bombing of a Sunday school. Ken is funny and intelligent, but he gives readers a clearer sense of Byron's character than his own and seems strangely unaffected by his isolation and harassment (for his odd look—he has a lazy eye—and high reading level) at school. Curtis tries to shoehorn in more characters and subplots than the story will comfortably bear—as do many first novelists—but he creates a well-knit family and a narrator with a distinct, believable voice. (Fiction. 10-12)