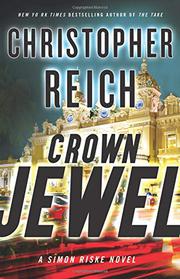 Riske is a restorer of high-end automobiles—Ferraris, Bugattis, that sort of thing—who moonlights as a problem-solver to the wealthy, and this second caper (The Take, 2018) takes him to southern France and Monaco in the service of Toby Stonewood, managing partner of the Casino de Monte-Carlo. Toby has been losing money, millions of dollars, from his casino, and he wants Riske to try to uncover how he is being cheated and who is doing it. Riske is well-qualified to undertake this assignment, having spent his younger years with the Corsican mob and being familiar with the ways of gangsters. His cover will be that he is to take part in the Concours d'Élégance scheduled there and drive in a time trial. When fate drops a Ferrari Daytona in his figurative lap, Riske is off to the races. After minor complications on French highways, Riske arrives in Monte Carlo and quickly identifies the individuals involved in the casino scam. In addition, he makes the acquaintance of Vika, a particularly compelling woman, and allows himself to become involved in her problems. Vika's mother has recently died in an automobile accident—the authorities rule it suicide, but Vika knows that cannot be correct, because her mother had poor vision and rarely drove at all and never at night. Further, Vika's mother left Vika a disturbing voicemail that suggests she felt herself to be in some danger. Riske and Vika meet circumstantially, and Riske helps Vika try to sort out what really happened. After Vika is threatened, then assaulted, Riske intervenes and learns she is in fact a princess and also that her assailants are members of the same Bosnian gang that is bleeding the casino. Unraveling the connection, rescuing the princess, and driving fast cars exceedingly well keep Riske busy. Falling in love, even with a princess, seems a little déclassé for Simon Riske, whose loner identity was molded in a French prison, but Vika seems a pretty nice girl, and she's worth billions.