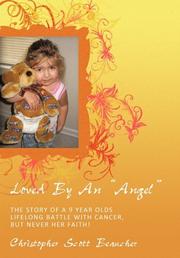 LOVED BY AN "ANGEL"

The Story of a 9 Year Olds Lifelong Battle with Cancer, but NEVER her Faith!

A father’s loving tribute to his angelic daughter who succumbs to brain cancer.

Beaucher details his daughter’s fatal journey from her diagnosis with medulloblastoma at age 2 and a half to her death two months after her ninth birthday. The book is as much a journal of Beaucher’s feelings as it is a chronicle of his daughter’s illness, as much his story as hers. He describes Kristin’s initial symptoms, diagnosis and treatment; the five and a half good years between her remission and relapse; and the last five months after the first signs of the cancer’s return. Beaucher’s voice makes the story feel more like a listen than a read, and his vulnerability and concern for his daughter lend pathos to the narrative. He wrote the book “to show people what she accomplished and how she did it. With the gaze of her eyes, the soft touch of her hand, the soothing sound of her voice, and sometimes not saying a word at all, she changed the outcome of people’s lives…I would say that it was pretty miraculous, don’t you think?” An overabundance of individual thank-you’s litters many of the chapters, and the coverage of events is inconsistent. Beaucher spends a chapter describing how he gets a tattoo of Kristin (a sign from God gave him the go-ahead), but he tucks away in the epilogue a brief mention of his decision to get a divorce from Kristin’s mother and spends little time relating how that affected Kristin, except to say that her prayers brought them back together. Devout readers may gain inspiration in Kristin’s tale, others may tire of Beaucher’s Pollyannaism. But the author never wavers in depicting his daughter as he saw her. “She was perfect in every way, shape, and form…Kristin was the most amazing person I knew.”

The faithful may see an inspiring story of the happy life and untimely death of a little girl whose father will always love her; others will find an overlong fairy tale sadly lacking its happily ever after.