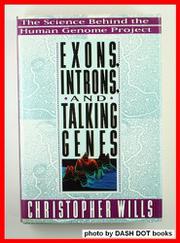 The Science Behind the Human Genome Project

Wills (Biology/Univ. of Cal. at San Diego) serves up a full platter in this insider's view of biology's ``Big Science'' project. While the subtitle suggests that his aim is to educate the reader about the science, he has a lot to say about the politics and personalities as well. The text begins with a vision of the brave new world ahead with its myriad genetic manipulations and therapies and their sociopolitical implications. Then it's on to the origins of the Human Genome Project. Wills credits Nobelist Renato Dulbecco with having proposed the concept. What got a reluctant biomedical community on board was a concatenation of events: News that the Department of Energy was moving full steam ahead on technology for DNA sequencing; Congressional prodding; conversion of a few key players; and appointment of James D. Watson himself to lead the effort for the National Institutes of Health. Wills does a fine job of putting the reader in the technological picture, including a marvelous tour ``through the genome with gun and camera'' in which even savvy readers may be startled to find how rapidly DNA is copied, moved to the cell body, and processed into proteins. Major milestones such as the discovery of the genes for muscular dystrophy and cystic fibrosis are described in detail, with no sparing of the inside dope on who did what to whom in the race to be first. In contrast to other recent historians of genome research, Wills makes it clear that all that so-called junk DNA between the ``exons'' that are the ``real'' genes may not be junk after all; indeed, the message is that nothing is as simple as it seemed at first. Final chapters deal with the challenges posed by cancer, schizophrenia, and the implications of finding genes related to talents/behavior/intelligence. Here, Wills can be faulted for too- summary a treatment of complex issues. Overall, though, a first- rate exposition by someone who must be a super teacher.