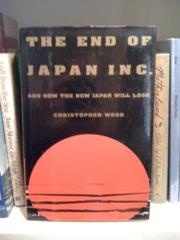 THE END OF JAPAN INC.

And How the New Japan Will Look

A savvy journalist's timely take on the evanescence of Japan's economic invincibility. Fresh from a stint as Tokyo bureau chief for The Economist, Wood (Boom and Bust, 1989) argues convincingly that the island nation poses a fading threat to Asian as well as Western rivals. Among other woes, he asserts, Dai Nihon's industrial base is burdened by overcapacity and swollen payrolls. The kind of mass dismissals that have kept America's labor costs at acceptable levels, the author observes, are inevitable if Japan is to remain competitive in world markets. By his tellingly detailed account, moreover, the country's financial institutions are not only primitive by Western standards but also vulnerable to future shocks created by the deflation of overvalued assets (in particular, urban property) and a rigged securities market that is not geared to provide corporations with either venture or expansion capital. Nor is Japan abreast, let alone ahead, of the pack in advanced technologies like computer software and wireless communications, which could offset declining demand for entertainment goods (TVs, VCRs, et al.). Wood points out as well that scandals have fractured the so-called iron triangle (business, the once-vaunted bureaucracy, professional politicians), effectively ending the Liberal Democratic Party's dominion and making Japan's governance more Italianate than Asian. He goes on to predict that civil disorders are likely once private enterprise starts downsizing and bargain-minded consumers systematically seek better deals in the nation's protected retail marketplace. In the meantime, the US is no longer willing to overlook the sharp practices of an ally no longer needed as a Pacific Basin buffer against the erstwhile Soviet Union. The subtitle notwithstanding, the text offers precious few perspectives on how Japan might emerge from its possibly convulsive renewal and restructuring. A worst-case audit that, if longer on reportage than analysis, provides ample evidence that Japan's challenge to the Global Village's economy has been put on hold by a host of home-front problems.