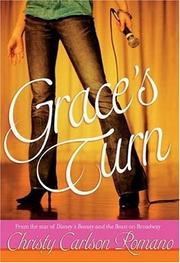 Grace has two dreams: She and best friend Emily want to join the A-list of popular students in high school; her deepest desire, though, is to become an actress in Broadway musicals. The first dream comes true easily: The school’s handsome star quarterback pursues Grace, and they begin dating. When a Tony-winning Broadway director arrives to take charge of the school musical, Grace yearns to play the lead. Against long odds she wins the part, but discovers that others aren’t willing to support her as she gets the chance to audition for a real Broadway play. Romano portrays Grace’s struggles with convincing realism, as she herself has starred on Broadway and knows whereof she writes. Convincing, too, are Grace’s struggles with her loved ones. Beyond mere realism, Romano writes with fluid ease, rendering the book accessible and interesting. A winner, especially with young readers who dream of the stage. (Fiction. 11-14)