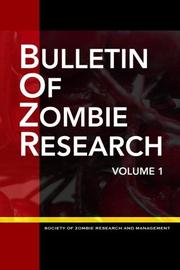 Leppanen’s sci-fi debut is a collection of scientific reports on how best to control and manage the worldwide spread of Zooanthroponotic Occult MetaBiomimetic Infectious Encephalitis—zombies!

The Society of Zombie Research and Management conducts studies on zombies, who have been a serious concern for about 50 years—long enough that undead test subjects can be selected from a containment facility in Minnesota. The research involves people in various stages, such as asymptomatic humans who have tested positive for ZOMBI Encephalitis or those in the more advanced stages, typically demarcated by the consumption of human flesh. Experiments range from the effect zombies have on monarch butterflies, which seem to prefer them as hosts for feeding and pupating, to the public’s association of baldness or thinning hair with infected humans. Leppanen commits completely to her book, abandoning a standard narrative and writing in the cold voice of a scientific study, including graphs, tables and selected literature (both genuine and fictional) at the end of each study. But hidden within the technological jargon is the story of a world surviving a devastating epidemic. Aside from the Convention on Global ZOMBIE Safety, there’s mention of humans killing other humans based on the mere probability that individuals with different colored eyes could be infected. There are also instances of utter creepiness: In one experiment, humans are dosed with aminopyralid, an herbicide, in an effort to combat the problem resulting from weeds growing at a faster rate in zombie tissue; and expectant mothers should be wary of the study involving infected pregnant women (hint: “cannibalistic offspring”). But it’s Leppanen’s academic approach to ZOMBI Encephalitis that resonates loudest. Zombies are unmistakably the norm, and the research nonchalantly takes into account a few horrifying issues—e.g., an inability to determine a test subject’s time of death, since he or she may appear alive, and in a study on zombie communication, speculation that zombies are frustrated because there’s no one to eat. The studies do become progressively more intense (one dealing with infected cancer patients surviving longer than uninfected ones), but the eight experiments, presented as separate sections, could be ingested in any order.

Morbidly fascinating, even in its deadpan style; likely to become a staple in zombie collections.