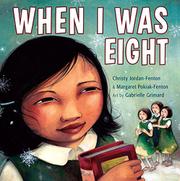 WHEN I WAS EIGHT

The authors of Fatty Legs (2010) distill that moving memoir of an Inuit child’s residential school experience into an even more powerful picture book.

“Brave, clever, and as unyielding” as the sharpening stone for which she’s named, Olemaun convinces her father to send her from their far-north village to the “outsiders’ school.” There, the 8-year-old receives particularly vicious treatment from one of the nuns, who cuts her hair, assigns her endless chores, locks her in a dark basement and gives her ugly red socks that make her the object of other children’s taunts. In her first-person narration, she compares the nun to the Queen in Alice in Wonderland, a story she has heard from her sister and longs to read for herself, subtly reminding readers of the power of literature to help face real life. Grimard portrays this black-cloaked nun with a scowl and a hooked nose, the image of a witch. Her paintings stretch across the gutter and sometimes fill the spreads. Varying perspectives and angles, she brings readers into this unfamiliar world. Opening with a spread showing the child’s home in a vast, frozen landscape, she proceeds to hone in on the painful school details. A final spread shows the triumphant child and her book: “[N]ow I could read.”