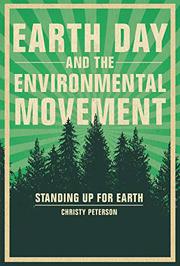 EARTH DAY AND THE ENVIRONMENTAL MOVEMENT

Standing Up for Earth

A comprehensive overview of the environmental movement from its inception to the present day.

Despite the book’s retro, somewhat stodgy look, this is stimulating—and critical—reading. Peterson (Cutting-Edge Hubble Telescope Data, 2019, etc.) clearly and thoroughly guides readers through the idea for and inception of the first Earth Day on April 22, 1970. While the sheer amount of information relayed could be mind-numbing in less adept hands—the narrative presents the legal battles and stutter-steps through the last six presidential administrations and earlier—it is told in manageable bites interspersed with plenty of fascinating sidebars. Readers will understand the legal processes by which laws are enacted, an empowering move that counteracts the inevitable feeling of frustration at the infinitesimally slow forward progress. If readers forget the dates and timelines, they will for sure come away with this one thing: that a group of dedicated people can make, and have made, a difference despite political, industrial, and social obstructions. The narrative commendably discusses the historical roots of racial bias among environmentalists and environmental groups (the Sierra Club and Audubon Society “had strong ties to…racist and classist viewpoints” of those who “believed that poor and minority communities were directly responsible for declining wildlife numbers”) and doesn’t take a partisan political stance, presenting facts evenhandedly.