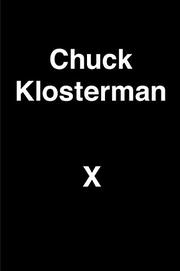 A collection of journalistic pieces that remain provocative, or at least interesting, even if the subjects that inspired them have faded from memory.

In his 10th book, pop-culture contrarian Klosterman (But What If We’re Wrong?: Thinking About the Present as If It Were the Past, 2016, etc.) suggests that he has matured more gracefully than many of those he has written about. He built his career as the anti-critic critic, the guy who embraced hair metal and didn’t care much for a lot of what music critics claimed to love. Or, as he writes in one of his more recent introductions to older pieces, “one of the things I love about covering uncool artists is that groups widely described as ‘hated’ are almost always more popular than groups who are described as ‘beloved,’ ” referring to a piece on the critically reviled Creed and Nickelback. On that same page, he remarks, of a longer retrospective, “I don’t expect most people who buy this book will read a ten-thousand-word essay on KISS. It is, however, twice as good as a five-thousand-word essay on KISS.” Though it has been tempting to dismiss Klosterman as a one-trick pony, claiming black where others (in print at least) see white, the best work offers insight into the relations among artist, art, and audience that goes considerably deeper. The profiles of Taylor Swift, Kobe Bryant, and Jonathan Franzen will leave readers with fresh appreciation for both the subjects and the journalist, who understands how the three are similar in terms of what they have accomplished and what challenges they have faced in terms of popular perception. It is possible that nobody has ever understood Swift better on the page, while the Franzen piece falls a little short of that for reasons Klosterman explains: “We are both working writers with vaguely similar lives. He, however, is more talented, more successful, and considerably more respected….There was a power imbalance, recognized by both of us.”

Even those who only dimly remember Royce White, Pavement, or Gnarls Barkley will find the reflections on them engaging.