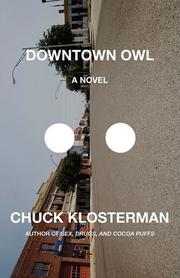 A debut novel that works better as cultural criticism than it does as fiction.

Popular journalist Klosterman built his reputation with a musical memoir (Fargo Rock City: A Heavy Metal Odyssey in Rural North Dakota, 2001) that established him as the anti-rock-critic rock critic, a writer who could explain why things that rock critics dismiss as dumb are really significant and things that rock critics celebrate are often dumb. For his first novel, he returns to his native North Dakota, while making sure to assert: “This story is a non-autobiographical work of fiction.” It also isn’t much of a story, encompassing as it does the narrative perspectives of three characters who are more generic than fully fleshed and whose interaction with each other is minimal. Mitch is a regular guy and underappreciated football player (by his coach, who has a history of impregnating students), who can’t really understand the appeal of some of the music his friends have started to embrace (Van Halen, ZZ Top, Def Leppard). Julia is the new history teacher who becomes the unlikely femme fatale in a small town that doesn’t attract many young, single females. Horace is an old guy who drinks coffee and swaps gossip with other old guys at the coffee shop in what the title ironically terms “downtown Owl.” The short chapters are chronologically dated from late summer 1983 until the climactic blizzard of winter 1984. There is some exegesis of the George Orwell novel and the Van Halen album that both take their title from the latter year. Klosterman has a feel for how kids find fun, meaning and purpose (or don’t) in small-town Dakota, but the fact that the movie theater is closing invites unfortunate comparisons with Larry McMurtry’s far superior The Last Picture Show.

This will likely find a wider readership with those who love Klosterman (from his nonfiction books and magazine work for Esquire, ESPN, Spin et al.) than those who love novels.