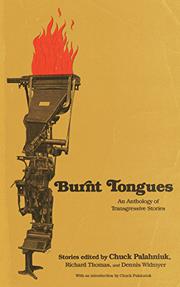 Twenty stories of embattled brothers and twisted sisters hand-selected by Palahniuk and two comrades from his online community The Cult.

Transgressive fiction is a much broader label than many readers realize, encompassing everything from Hubert Selby Jr.’s gritty Last Exit to Brooklyn to Alissa Nutting’s much-debated Tampa. Palahniuk (Doomed, 2013, etc.) is arguably the most capable modern practitioner of the style and certainly its most visible champion. “We return to troubling films and books because they don’t pander to us—their style and subject matter challenge, but to embrace them is to win something worth having for the rest of our lives,” he proclaims. “The difficult, the new and novel establish their own authority.” That said, these creative endeavors remain mostly male and uniquely grotesque, inhabiting their own peculiar orbit in the universe of American lit. Many are about self-harm, resembling some of the stories—like the infamous nausea-inducing “Guts,” for example—from Palahniuk’s Haunted (2005). In Neil Krolicki’s “Live This Down,” a clique of teenage girls find themselves humiliated after a botched suicide attempt. There’s also the disgruntled retail clerk in Richard Lemmer’s “Ingredients,” scarred inside and out after a dare goes wrong. Other stories, including Matt Egan’s “A Vodka Kind of Girl” and Brandon Tietz’s “Dietary,” explore the fear and loathing between women and body image. Almost always there’s a tendency to examine the dichotomy between the damage we do to our bodies and the strange secrecy of our inner monologues. That’s certainly true in Phil Jourdan’s “Mind and Soldier,” about a disabled vet, and Keith Buie’s “The Routine,” recounting the sins of an overworked graveyard shift pharmacist. Some stories are subtle, like Chris Lewis Carter’s “Charlie,” recounting the cycle of animal abuse. Others are not—see the casual zoophilia of Brien Piechos’ “Heavier Petting” and the collection’s closer, “Zombie Whorehouse” by Daniel W. Broallt. No, it’s not a metaphor.

Dark, subversive and disquieting fiction for readers ready to go all the way down.