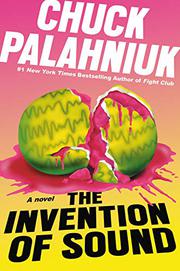 THE INVENTION OF SOUND

The modern architect of transgressive fiction returns with the tale of a sonic artist looking for the perfect scream.

Palahniuk dives deep into Hollywood noir with a grotesque and outrageous stand-alone that marries the sexual deviance of Snuff (2008) with the late-stage sadism of Bret Easton Ellis. Reminding us from the beginning, “Keep Telling Yourself It’s Only a Movie,” Palahniuk thrusts us into the demented world of one Mitzi Ives, a pill-popping, masochistic, borderline psychotic woman whose specialty in her profession as a freelance Foley artist is capturing the screams of people in the worst agony of their lives. Her narrative runs parallel to that of Gates Foster, an investigator who specializes in tracking down pedophiles. Also in the mix is fading movie star Blush Gentry, whose autobiography, Oscarpocalypse Now, interrupts the torture scenes from time to time, as well as Schlo, the inevitably creepy movie producer. The figure that ties all these deviants together is Dr. Adamah, nominally the physician for Mitzi but, at the book’s core, its real villain. You have to give Palahniuk credit, because there’s just nobody like him when it comes to skeeving out readers, but as in many of his nihilist fancies, there’s nobody to root for here. Gates is a bit useless in the detective department, and Mitzi quite literally disses her boyfriend, Jimmy, because he “only managed to knock out one of her front teeth.” Palahniuk is an acquired taste, and fans will appreciate the story that scrapes like fingernails on a chalkboard and the familiar post-capitalism end-of-the-world vibe, but it might be a little too close for comfort for less amenable readers.

A Hollywood fantasy that’s all about hurt until the very end, which is so much worse.