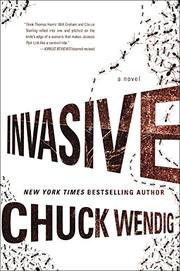 The world teeters on the brink of destruction once more in this spiritual sequel set in the same world as Wendig’s wetwork horror story Zer0es (2015).

After the events of the last novel, FBI Agent Hollis Copper is understandably spooked by a world that’s becoming increasingly threatened by expanding technology. To help him push back against the things going bump in the night, he’s seconded futurist Hannah Stander to his department to help shine a light on bleeding-edge tech gone awry. She’s suitably intrigued when he calls her with a dilemma: “I’ve got a cabin on the lake with more than a thousand dead bodies in it....Think of it like a riddle.” What she finds in rural New York is a dead man with no skin, surrounded by hundreds of dead ants. Hannah’s investigation leads her to Ez Choi, a punk-rock Asian-American entomologist. Ez discovers that the ants weren’t just unleashed, but engineered, and they bear the same genetic markers employed by biotech billionaire Einar Geirsson, a reclusive Icelandic billionaire operating a secret biotech lab off the coast of Hawaii. If the setup sounds very Crichton-esque, it is, but Wendig puts his own stamp on this propulsive techno-thriller with his signature action set pieces, a deeply damaged heroine, and a pervasive threat that will give all but the most hardened readers the creepy-crawlies. The book makes some very salient points about the ethics of genetic engineering but doesn’t forego action as the book culminates in a biological catastrophe, not to mention a deadly cat-and-mouse chase on the treacherous Kalalau Trail on the North Shore of Kauai. Hannah Stander is a standout heroine—raised by survivalists and gifted with an unparalleled ability for predictive analysis. Think Thomas Harris’ Will Graham and Clarice Starling rolled into one and pitched on the knife’s edge of a scenario that makes Jurassic Park look like a carnival ride.

Another rip-roaring, deeply paranoid thriller about the reasons to fear the future.