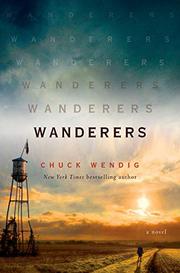 What if the only way to save humanity was to lose almost everyone?

This was kind of inevitable: Wendig (Vultures, 2019, etc.) wrestles with a magnum opus that grapples with culture, science, faith, and our collective anxiety while delivering an epic equal to Steven King’s The Stand (1978). While it’s not advertised as an entry in Wendig’s horrifying Future Proof universe that includes Zer0es (2015) and Invasive (2016), it’s the spiritual next step in the author’s deconstruction of not only our culture, but the awful things that we—humanity—are capable of delivering with our current technology and terrible will. The setup is vividly cinematic: After a comet passes near Earth, a sleeping sickness takes hold, causing victims to start wandering in the same direction, barring those who spontaneously, um, explode. Simultaneously, a government-built, wickedly terrifying AI called Black Swan tells its minders that a disgraced scientist named Benji Ray might be the key to solving the mystery illness. Wendig breaks out a huge cast that includes Benji’s boss, Sadie Emeka; a rock star who’s a nod to King’s Springsteen-esque Larry Underwood; a pair of sisters—one of whom is part of the “herd” of sleepwalkers and one who identifies as a “shepherd” tending to the sick; and Matthew Bird, who leads the faithful at God’s Light Church and who struggles with a world in which technology itself can become either God or the devil incarnate. Anyone who’s touched on Wendig’s oeuvre, let alone his lively social media presence, knows he’s a full-voiced political creature who’s less concerned with left and right than the chasm between right and wrong, and that impulse is fully on display here. Parsing the plot isn’t really critical—Wendig has stretched his considerable talents beyond the hyperkinetic horror that is his wheelhouse to deliver a story about survival that’s not just about you and me, but all of us, together.

Wendig is clearly wrestling with some of the demons of our time, resulting in a story that is ambitious, bold, and worthy of attention.