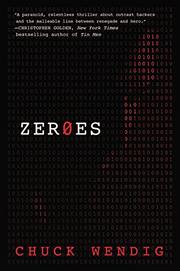 Prolific sci-fi novelist and games enthusiast Wendig (Under the Empyrean Sky, 2013, etc.) whips up a Matrix-y bit of old-school cyberpunk updated to meet the frightening technology of the modern age. Government agent Hollis Copper is a tough old guy who's been seconded to the National Security Agency to round up a bunch of hackers for a secret project. [They’re an odd bunch. Chance Dalton is an Anonymous poser who uses dark Web tactics to out evildoers. DeAndre Mitchell uses ATM skimmers to pay for his mom’s house. Aleena Kattan uses her wicked code-breaking skills in the name of hacktivism in support of the Arab Spring. Reagan Stolper is a foulmouthed, ill-tempered troll who ruins lives in the name of “lulz.” Finally, there’s Wade Earthman, a Vietnam vet skilled in the dark arts of phishing and phreaking. They’re promised clean records if they devote a year to the NSA’s secret lodge, where pods of hackers work together to penetrate high-security networks. Things go awry when they’re charged with disrupting Iran’s nuclear program by co-opting an Iranian drone and accidentally discover a secret NSA program called Typhon and the disappearance of 13 prominent theorists. The “Zeroes” find themselves pawns in a conflict among their government captors, a renegade hacker called The Widow of Zheng, and Typhon, a sentient artificial intelligence which is growing in power and influence with every passing minute. “Because they have to be willing to accept us,” it says. “Because sometimes the child has to touch the hot stove to learn why he shouldn’t do it again. Because in chaos, there is opportunity.” This is an ambitious, bleeding-edge piece of speculative fiction that combines hacker lore, wet-wired horror, and contemporary paranoia in a propulsive adventure that’s bound to keep readers on their toes.

An action-packed yet cerebral thriller that lives in that murky nexus between today and the future.