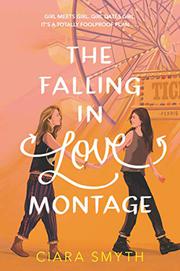 THE FALLING IN LOVE MONTAGE

A girl-girl rom-com packed with all the standard cheesy moments and raw emotions.

Having just completed her final exams, 17-year-old Saoirse heads into summer after high school with a lot on her plate: not wanting to attend prestigious Oxford, though her father’s set on it; navigating the anxiety and struggles of a mother suffering from early-onset dementia; and her father’s upcoming marriage to his new girlfriend, Beth. To postpone dealing with any of that, she heads to a party. There, she finds a cute girl to kiss—Ruby, visiting the seaside Irish town from her native England. Ruby adores romantic comedy films. To convert horror-loving Saoirse, Ruby proposes they try to complete a list of rom-com clichés over the summer. Commitment-phobic Saoirse’s keen to promote wholesome lesbian romance and to keep things casual. As they spend time together, however, it gets harder for Saoirse to follow her own relationship boundary rules. The novel’s voice is delightfully brash and no-nonsense while it simultaneously reveals Saoirse’s vulnerabilities as she deals with various feelings of betrayal. Smyth paints each character as a complex, messy, lifelike individual. Irish slang adds cultural texture to the story. Most characters are cued as white; Beth is English and brown-skinned.

Pleasantly and audaciously fills a gap in queer romance.