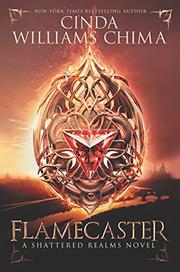 From the Shattered Realms series, volume 1

Chima revisits the Seven Realms for the next generation of warfare, intrigue, romance, and magic.

Adrian “Ash” sul’Han, young prince of the Fells, has lost too much to the monstrous king of Arden and runs away to train as a wizard healer, devoting his spare time to assassination. Jenna Bandelow, destitute Ardenine coal miner, has suffered even more, and she joins the guerrillas rebelling against the crown. Years later their winding paths collide at the Ardenine court, with one a slave and the other a prisoner. Between Ash’s deadly skills and magical power and Jenna’s saboteur training and mysterious magemark, together they might achieve the vengeance neither could accomplish alone. Readers hoping for a cheery reunion with beloved characters will be dismayed at the pain, violence, death, and horror on tap from the opening pages, but those expecting immersive worldbuilding, twisty plotting, and complex characterization will be hooked. Guilt-ridden Ash is oddly well-matched with fierce, passionate Jenna; the large cast of secondary characters who help or hinder their quests all command attention as well. The secret of Jenna’s magemark will surprise nobody, but it promises fascinating future ramifications; and even as one villain is foiled, a new, more sinister threat looms over the Realms.

A welcome return for loyal fans and a splendid jumping-on point for new ones. Both will be panting for the next installment.