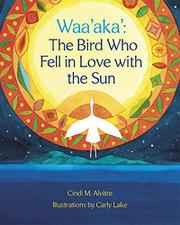 The Bird Who Fell in Love With the Sun

An #ownvoices creation story of the Indigenous people of Southern California, brimming with vivid imagery. This stunning picture book weaves gorgeous prose from Tongva author Alvitre with the evocative watercolors of illustrator Lake to convey an ancient story: first, how sacred plants came into being, and later, how the sun came to be in the heavens. Expressed through the relationship between Waa’aka’, the “sleek and beautiful” white bird, and Tamet, the sun, Tongva values such as collaboration and humility are emphasized through the animal characters—demonstrated handily by Owl, Kingfisher, and Raven and sorely missing within Waa’aka’, who turns out to be quite self-centered. As the narrative unfolds, a wide range of young readers will be enthralled by the tension between Waa’aka’ and her fellow birds, who work together to heave the sun into the cosmos while, secretly, Waa’aka’ attempts to sabotage the project in order to keep the sun for herself. The plan eventually succeeds; when Tamet is flung into the heavens, Waa’aka’ ascends with him, her pearly feathers accidentally burned by Tamet’s fire. With her ulterior motives exposed, Wiyot, the creator, relegates Waa’aka’ to a nocturnal existence, never to see the sun again. Lake’s paintings bloom with life, modulating between symbolic and realistic representation to convey the tale. Wiyot’s russet-colored hands appear throughout, emphasizing his role in creation.