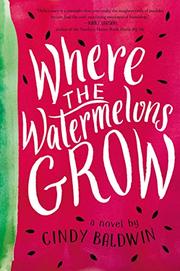 WHERE THE WATERMELONS GROW

Della painfully learns she can’t fix her schizophrenic mother, but maybe the 12-year-old can heal herself.

It’s bad enough that her daddy’s watermelons, the sweetest in all of North Carolina, are in jeopardy because of disease and drought, now Della’s mama is acting “crazy” again, hearing voices that warn her to keep germs away from Della and her baby sister, Mylie. The preteen knows that her mother’s schizophrenia surfaced when she was born and blames herself for her mother’s condition. Della’s also heard stories, passed down through her small town, about the miraculous powers of the honey from Miss Tabitha‘s backyard hives. Della makes it her mission to cure her mama and is certain Miss Tabitha’s honey will do the trick. Her first-person narration is realistically earthy without crossing into gritty. The math-loving girl witnesses some of her mother’s breakdowns and assumes most of Mylie’s care, but she’s still very much a child, not yet ready for the boys and kissing she hears come with seventh grade. As her mother’s health fades, Della finds she has other strong women in her life, including Miss Lorena, who’s experienced her own tragic loss. As Della accepts that her mother will always be sick (though never “crazy” anymore, and the text makes the term’s harmfulness quite clear throughout), Miss Tabitha’s honey does work, giving this spunky girl the resilience to overcome hardship. This debut novel gushes with Southern charm and depicts a warm, compassionate community where white families like Della’s and Miss Tabitha’s live amicably alongside black families like Miss Lorena’s.

This story’s as sweet as Della’s daddy’s watermelons but never saccharine.