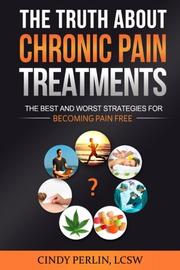 The Truth About Chronic Pain Treatments

The Best and Worst Strategies for Becoming Pain Free

Perlin, a licensed clinical social worker and the former president of the Northeast Regional Biofeedback Society, runs an Albany, New York–area practice. Her primary concern is for the estimated 116 million Americans affected by chronic pain, whose treatment costs upward of $560 billion per year. She writes that she believes that current pharmaceutical treatments are sometimes ineffective and that alternative methods are “actively suppressed by the medical establishment.” Drug manufacturers, she says, can hide side effects; she also says that there might be funding bias, noting that the wealthy Mayo Clinic refuted Nobel Prize–winner Linus Pauling’s findings regarding vitamin C’s role in fighting cancer. The book starts by discussing some well-known treatment options—opioids, nonsteroidal anti-inflammatory drugs, and pain injections—but quickly branches into less-obvious territory. In comparison to pharmaceuticals, the author says, mind/body treatments are safe, cheap, and effective. Yet promising alternatives that might mitigate back and neck pain, fibromyalgia, and post-traumatic stress disorder—such as massage, nutrition, herbs, exercise, acupuncture, energy healing, laser therapy, and even marijuana—are barely on the radars of doctors or insurance companies, Perlin laments. All too often, she says, they’re dismissed as placebos, and chiropractic and homeopathy, in particular, attract negative publicity. To counter these rejections, Perlin includes an invaluable section called “Research Results” after describing each treatment type, providing details of relevant evidence-based studies that suggest health benefits. She also addresses potential side effects and gives helpful statistics and case studies—some featuring famous people, such as singer Michael Jackson and President John F. Kennedy—to show the range of experiences that people have had. The book concludes on a daring note, proposing a Pain Treatment Parity Act that would require insurers to cover all credible pain treatments equally, not just pharmaceuticals. Readers who are suffering and in need of instant solutions may not want to wade through all the research and industry information in this book. However, its all-embracing approach makes it suitable for laymen and health care providers alike.

A book that makes a convincing health care case, supported by extensive footnotes and references to scientific journals.