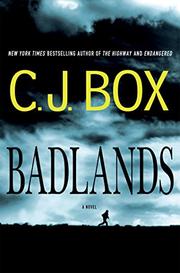 Box takes another break from his highly successful Joe Pickett series (Stone Cold, 2014, etc.) for a stand-alone about a police detective, a developmentally delayed boy, and a package everyone in North Dakota wants to grab.

Cassandra Dewell can’t leave Montana’s Lewis and Clark County fast enough for her new job as chief investigator for Jon Kirkbride, sheriff of Bakken County. She leaves behind no memories worth keeping: her husband is dead, her boss has made no bones about disliking her, and she’s looking forward to new responsibilities and the higher salary underwritten by North Dakota’s sudden oil boom. But Bakken County has its own issues. For one thing, it’s cold—a whole lot colder than the coldest weather Cassie’s ever imagined. For another, the job she turns out to have been hired for—leading an investigation her new boss doesn’t feel he can entrust to his own force—makes her queasy. The biggest problem, though, is one she doesn’t know about until it slaps her in the face. A fatal car accident that was anything but accidental has jarred loose a stash of methamphetamines and cash that’s become the center of a battle between the Sons of Freedom, Bakken County’s traditional drug sellers, and MS-13, the Salvadorian upstarts who are muscling in on their territory. It’s a setup that leaves scant room for law enforcement officers or for Kyle Westergaard, the 12-year-old paperboy damaged since birth by fetal alcohol syndrome, who’s walked away from the wreck with a prize all too many people would kill for.

A suspenseful, professional-grade north country procedural whose heroine, a deft mix of compassion and attitude, would be welcome to return and tie up the gaping loose end Box leaves. The unrelenting cold makes this the perfect beach read.