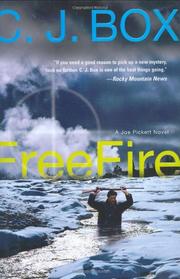 Fired from his job as Game and Fish Warden after wrapping up his colorful sixth case (In Plain Sight, 2006), Joe Pickett returns to nab the perpetrator of the perfect crime.

According to his own confession, small-time lawyer Clay McCann, feeling bullied and insulted by four campers he encountered in Yellowstone Park, shot them dead. A ingenious technicality he’s discovered, however, prevents him from being tried and convicted. Wyoming Governor Spencer Rulon, a former prosecutor, can only slap McCann’s wrist, but he’s determined to figure out what Rick Hoening, one of the victims, meant by an email that hinted at secrets that could have a major impact on the state’s financial health. So he asks Joe, now working as foreman at his father-in-law’s ranch, to poke around the park while maintaining full deniability for the Governor. The situation stinks, but Joe’s so eager to get away from his wife’s poisonous mother and go back to his old job that he agrees, and in short order there’s a spate of new killings to deal with—some committed by McCann, some not. As usual, there’s little mystery about which of the sketchy suspects is behind the skullduggery. But, as usual, the central situation is so strong, the continuing characters so appealing and the spectacular landscape so lovingly evoked that it doesn’t matter.

Middling for this fine series, which automatically makes it one of the season’s highlights.