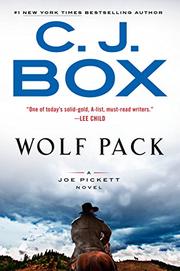 Fired after his last colorfully insubordinate outing (The Disappeared, 2018), Wyoming Fish and Game Warden Joe Pickett is back on the job in Twelve Sleep County just in time to follow the trail from a routine misdemeanor to a quartet of hired killers.

Katelyn Hamm, Joe’s counterpart in Shell County, is saddened and angry to see a herd of terrified mule deer fleeing, some to their deaths, from an unregistered drone aircraft that disappears in the direction of Twelve Sleep County. This isn’t the first time locals have spotted the drone, and Katelyn wants Joe to track down its owner. Joe obligingly traces the rogue aircraft to the compound of Bill Hill, who gets him just as furious as Katelyn by freely admitting the offense, crumpling up the citation Joe gives him, refusing to follow him to the sheriff’s office, and assuring Joe that he’ll never have to answer the charge—and that Joe himself will be in trouble if he presses too hard. Trouble promptly arrives in the form of two FBI agents from the nation’s capital who warn first Katelyn, then Joe, off the case, which they consider no big deal compared to the threat against thousands of lives—“maybe tens of thousands….Maybe millions”—they’re handling but refuse to identify. Meanwhile, four professional killers, including a particularly fatal female, are headed to Twelve Sleep County from Arizona, where they’ve just killed their latest target, his wife, and a friend who happened to have stopped by. Squeezed between the feds and the Wolf Pack, a murderous arm of the Sinaloa drug cartel, Joe will himself be targeted, along with Katelyn, the FBI agents, the local sheriff, his wife’s best friend, and his own friend the outlaw falconer Nate Romanowski, for elimination before the killers can move on to their real target.

It’s obvious where all this is going, but Box gets you there, in one of most tightly wound tales, with more thrills than a snowy road on a steep mountain and more authority than the governor of Wyoming.