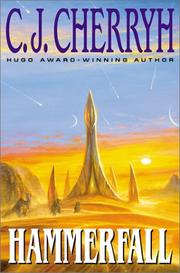 Advent of a new far-future series, from the author of Fortress of Dragons (2000), Precursor (1999), etc. A rebel against the omnipotent Ila, Marak Trin Tain guards lifelong his secret madness—voices speak his name and urge him to travel east; he beholds visions of a silver tower and a cave of suns—until his warlord father surrenders him to the Ila’s soldiers. They conduct Marak and other sufferers across the vast desert to the city Oburan. Here, with a red-robed au’it to record everything, the Ila instructs Marak to seek the source of the madness in the East. Organizing a caravan, Marak and his fellow-mad cross the desert, enjoying various adventures. Finally, the survivors reach their destination: the silver tower is real. Here, Luz explains that the Ila is immortal; she has nanomachines in her body, and used them to create the world as Marak knows it. Luz, equipped with different nanos, infected the mad with her own brand. Now, the enemies of the Ila’s ancestors, the ondat, are determined to destroy both the Ila and her world. Luz offers Marak a way to save himself and many others from the bombardment that will shortly destroy everything but a protected enclave around the silver tower: he must return to Oburan to persuade the Ila and all her people to march into the desert.

Plenty of gritty desert trekking, but no recognizable plot: a threadbare scenario that’s little more than elaborate stage-setting for the series to come. Very disappointing.