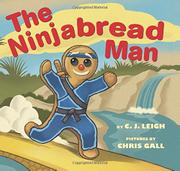 A ninja-themed retelling of “The Gingerbread Man.”

“Once upon a time, there was a little old sensei who taught ninjas in a hidden dojo.” Said sensei is a small fuchsia-and-white panda with trailing mustache and beard and a stereotypical conical hat, and his ninjas include Bear, Fox, Mouse, and Snake, all in black outfits tied with a colored belt. To reward their hard work, the sensei, working from an ancient recipe, crafts a Ninjabread treat: a tiny ninja complete with his own miniscule sword and throwing stars. When the cookie escapes the oven, the teacher warns his students with a gong. Bear, Snake, and Mouse hear it and confront the little cookie, but they fail to capture or eat him. Fox’s difficulty hearing anything over the sound of the waterfall gives him the perfect way to lure the Ninjabread Man closer, to the cookie’s demise. Leigh’s retelling may enthrall kids practicing martial arts, but the tale is rather weak: the rhymes the cookie spouts are loose and sporadic; the fights with the other ninjas are over too quickly; and it’s never clear just how the cookie succeeds against his much larger opponents. Spare, Asian-inspired scenes background the action of the ninjas, who all sport extremely mean faces when confronting their small nemesis.

Adds little to the original while propagating Asian and martial arts stereotypes.