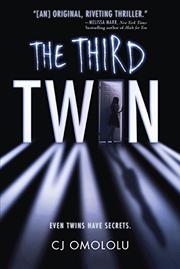 Could an identical twin be a killer without her sister knowing it?

It all began as a joke when Lexi and Ava were little: The identical sisters would imagine they had a “third twin” named Alicia. Now in their senior year of high school, the girls have reincarnated Alicia, using this persona to dress up and date boys they normally wouldn’t. They’ve even gone to the trouble of creating a fake ID and social media site to build a back story for this fictitious sister. The fun ends when Lexi, out as Alicia, is the last known person to have seen Casey, her date and would-be rapist, alive. Told from Lexi’s point of view, the mystery continues as more of “Alicia’s” dates turn up murdered. When the evidence and unusual coincidences all point to Ava, Lexi feels like the person she’s always known best is suddenly a stranger. And because they share DNA, Lexi also becomes a person of interest. As she races to find the real killer, she must also contend with moving on from high school to college, finding her own identity and trying to save the boy she really loves from meeting a deadly fate. Although the resolution may be more out of Hollywood than reality, the dramatic suspense will keep mystery fans entertained.

A classic whodunit for the teenage set.