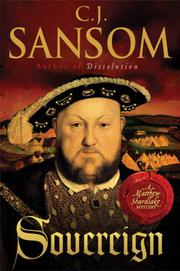 In the rainy autumn of 1541, in the city of York, clever, upwardly mobile, hunchback lawyer Shardlake and his trusty Jewish clerk Jack Barak slog through trackless forests with orders to protect an imprisoned rebel from his sadistic jailer. Cardinal Cranmer wants the prisoner brought back alive to London where he can be properly tortured for information about a recent conspiracy to unseat the once-glorious monarch, now obese and limping and on his fifth wife. The gloomy city is seething with resentment as Henry’s gigantic entourage approaches. Advance forces have taken over desecrated monasteries to house the thousands of soldiers, lawyers, courtiers, caterers and whores comprising the royal progress, and the Yorkers hate them all. Shardlake quickly stumbles onto the grisly murder of a glazier with ties to the rebellion and then himself becomes the victim of a string of attacks when he finds that the victim was guarding an old jewelry box containing documents that could blow the Tudor succession to bits. He’s knocked unconscious before he can read the papers, which quickly vanish, but someone thinks he knows enough to make him a danger. Shardlake has to elude the murderers, avoid his arch-enemy Sir Richard Rich and stay out of the way of the grumpy monarch, whose frisky, much younger wife, Catherine Howard, may be involved in a fatal flirtation. While Jack dallies with a pretty servant from Queen Catherine’s retinue, Shardlake gets assistance in his inquiries from a kindly old colleague who knows more about the conspiracy than he lets on. As always, former lawyer Sansom (Dark Fire, 2005, etc.) fleshes out the detection with rich historic details presented at a stately pace.