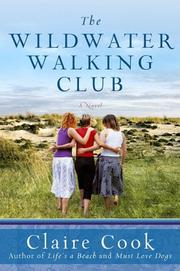 Unremarkable sixth novel from Cook (Summer Blowout, 2008, etc.), who seems to specialize in stories of middle-aged women crossing the sandpits that are their lives.

Noreen Kelly—mid-40s, single, childless, the owner of a perfectly decent house on the Massachusetts shore—has decided to take the buyout that Balancing Act Shoes is offering her. Eighteen months of salary and some career counseling sound pretty sweet, except now Noreen feels not just her job but her whole life is a little redundant. On a whim she buys a load of walking shoes with her employee discount, and soon she finds a walking partner in her neighbor Tess. Strangers until now (but for a brief conversation on the benefits of line-drying clothes), the two meander up to the big house on the hill and, with its owner Rosie, immediately organize the Wildwater Walking Club. Wearing Noreen’s discounted sneakers and pedometers, they surpass 10,000 steps every morning on their beach walk as they air their grievances: teenage daughters (Tess); an overfull plate of responsibilities (Rosie); the general sense of displacement (Noreen). Life-coaching courses have helped Noreen realize that her identity has been too defined by her corporate title. She needs to get a life, and maybe a boyfriend too, in the form of Rick, a fellow traveler in the world of recent unemployment. Meanwhile, the Wildwater Walking Club decides to treat itself to a little vacation. After much bickering, its three members decide on a lavender festival in Washington. A few subplots round out the story: Noreen’s mother comes for a visit and falls for Rosie’s dashing widowed dad; Tess and Noreen become involved in a right-to-air-dry movement; all three women follow the progress of a New Orleans teacher battling cancer who’s struck up an e-mail acquaintance with Tess. None of this raises the fictional temperature to anything above lukewarm.