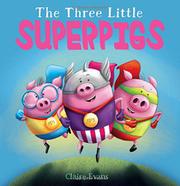 Will the Big Bad Wolf have his revenge on those three little pigs?

After the three little pigs captured the Big Bad Wolf in a pot of boiling water and sent him to Happily Never After Prison, the residents of Fairyland dubbed the little porkers THE THREE LITTLE SUPERPIGS (always referred to in all-caps). As the heroes fight crime all over Fairyland (and relish the attention from their fans), the Big Bad Wolf plots alone in his cell. Soon bricks begin vanishing from all over the realm, and the Wolf escapes from prison! All the denizens of Fairyland hide in their homes. Try as they might, the pigs can’t find the Wolf or the bricks…until he finds them and uses the bricks to capture the SUPERPIGS. Can they escape his trap—or is their bacon fried? Evans’ smart twist on the familiar tale will elicit giggles at its clever wordplay and fairy-tale cameos. The details in the (probably) digitally created, brightly colored illustrations will make repeated readings as much fun as the first—a police lineup of grandmas with an oh-so-obvious Wolf is particularly funny. All three pigs are male, and human residents of Fairyland all present white.