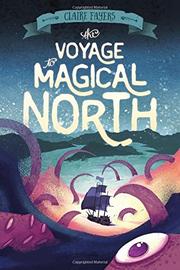 THE VOYAGE TO MAGICAL NORTH

For two young fugitives, being captured by pirates is only the first step in an epic quest for a fabled trove of gold and magic.

Hardly have inept apprentice magician Peter Magus, a white boy, and Brine Seaborne, a dark-skinned lass of 12 with an allergy to magic and no memory of her origins, fled a wicked master than they are picked up by legendary freebooter Cassie O’Pia, charismatic white captain of the equally renowned vessel Onion. Under the guidance of a scary but (supposedly) captive wizard, sails are set for the Magical North, where a massive concentration of starshell—corrosive but invaluable as the source of all magical power—is said to lie hidden amid mounds of treasure. Along with conceiving delicious hazards to overcome along the way, ranging from an island of misanthropic librarians to flocks of cute penguins with piranhalike habits, Fayers shows a bright if underused gift for comic description (one character sports “a face like a fish on a bad day”). She also surrounds her two high-friction protagonists with a vivid if not particularly diverse supporting cast featuring a decidedly atypical pirate captain and, for once, a boy disguised as a girl instead of the other way round.