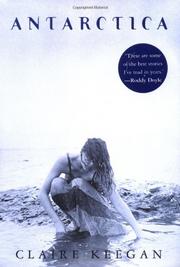 A first collection from Irish-born Keegan spans the Atlantic, touching down in rural Ireland and the southern US—with results often familiar or stretched-for, yet deftly done and alluringly readable.

In the title story, a happily married woman wants to find out what it’s like to have sex with someone else—and does so indeed, in a psychological clunker that crosses Hitchcock with O. Henry while remaining ever-intriguing to the eye. A near-wizardry of language and detail, too, closes the volume, with “The Ginger Rogers Sermon,” when a pubescent girl in Ireland, sexually curious, brings about the suicide of a hulking lumberman in a tone-perfect but morally inert story. In between are longer and shorter, greater and lesser tales. Among the better are “Men and Women,” about a suffering Irish farmwife who at last rebels against a cruelly domineering husband; the southern-set “Ride If You Dare,” about a couple who shyly meet after running personals ads; and “Stay Close to the Water’s Edge,” about a Harvard student who despises—and is despised by—his millionaire stepfather. Psychologically more thin or commonplace are “Storms,” told by an Irish daughter whose mother went mad; “Where the Water’s Deepest,” a snippet about an au pair afraid of “losing” her charge; or “The Singing Cashier”—based on fact, we’re rather pointlessly told—about a couple who, unbeknownst to their neighbors, commit “hideous acts on teenage girls.” Keegan’s best include the more maturely conceived “Passport Soup,” about a man devoured by guilt and grief after his daughter goes missing while in his care; “Quare Name for a Boy,” in which a young woman, pregnant by a single-fling boyfriend whom she no longer has an interest in, determines that she’ll go on into motherhood without him; and the nicely sustained “Sisters”—one dutiful and plain, the other lovely and self-indulgent—who come to a symbolically perfect end.

Carefully worked tales that are as good as many and better than most.