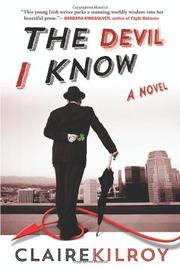 THE DEVIL I KNOW

The recent Irish property bubble fuels this story of an ill-fated developer and the mysterious, diabolical figure who supports him.

We meet Tristram St. Lawrence, the narrator of Kilroy’s fourth novel (Tenderwire, 2006), during a crash landing in his native Dublin, an experience that prompts him to think about drinking again and also reunites him with Hickey, a childhood friend. It’s 2006, and Hickey is doing well in the speculative business of residential and hotel developments; rezoning an industrial park for hotel rooms and condos is as easy as paying a “fee” to a minister, and desolate, abandoned farmland can be valuable if you can persuade the same minister to reroute a train line there. Hickey is the stereotypical muscle while Tristram is the brains, with the financial support of a Mr. Deauville (note the name), who is also Tristram’s AA sponsor, in contact solely by phone from an unlisted number. Kilroy means to humanize the absurdity of the global boom (and bust) without dwelling too much on its technicalities, which is to the book's credit; Tristram’s devilish supporter gives the story a touch of black humor and underscores the way small human foibles can result in multimillion-euro catastrophes. Even so, the book feels constrained, like a black-box play with just a handful of props, partly due to the story’s framing as Tristram’s court testimony 10 years after the fact. Moreover, Kilroy’s tight focus on Tristram, his alcoholism and his efforts to restrain Hickey’s greed (an addiction in its own right) make a potentially big story feel small, while some subplots are underdeveloped, particularly one in which Tristram pursues an affair.

Kilroy deftly characterizes the absurdity of a land grab, though within a curiously limited range of characters.