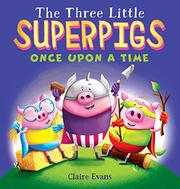 Once Upon a Time

An origin story for the Superpigs looks a lot like one many readers will be familiar with.

“Once upon a time, there were three little pigs. They dreamed of becoming SUPERHEROES! In fact,” readers are told, “they were so obsessed that their family house became cluttered with all of their superhero” paraphernalia. Evidently fed up with the mess, their mother sends them off into the world to find homes of their own, and after hours of travel, they arrive in Fairyland. Signs on trees warn of a wolf, and their new friend Little Red Riding Hood tells them stories of stolen sheep and stolen granny nighties. The pigs build their houses (you know the ones). Along comes the wolf and chinny-chin-chin rebuffs and huffing and puffing…it all leads to the inevitable two flat houses and one scalded, captured wolf. All of Fairyland declares them the “THREE LITTLE SUPERPIGS”—and the pigs get their wish. Evans’ unnecessary prequel to her cheeky, fractured original (2018) is a head-scratcher. Part of the charm of her first was that it picked up where the traditional tale left off. Why return to the source material with a rote retelling of the tale that a great many in her audience already know? Yes, this has a superhero twist, but that simply rehashes the first Superpig outing.

The few giggles from the illustrations don’t make this more than a pork-barrel project.