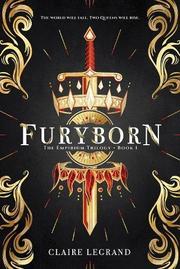 From the Empirium Trilogy series, volume 1

Two girls separated by a thousand years are connected by a prophecy.

In a prologue, readers learn that pale-skinned Queen Rielle has killed her husband, the biracial Audric. She gives birth to their baby while a war between angels and humans rages. To keep the infant safe from the angels’ leader, light-skinned Corien, Rielle desperately charges a child with magical abilities to use his gifts to flee with and protect her—with mixed success. Later chapters alternate between telling Rielle’s story and flashing forward 1,020 years to focus on olive-skinned Eliana. Following a childhood tragedy, Rielle hid her staggering ability to control all seven elements until a threat against her beloved Audric caused her to reveal her gifts, prompting the Magisterial Council to impose seven trials to determine whether she was the Sun Queen or Blood Queen spoken of in prophecy. While readers start off knowing her story’s end, a steamy romance and devious twists along the way pack surprises. Eliana, meanwhile, is a deadly bounty hunter—serving an evil empire in order to protect her own family—who gets mixed up with rebels when her mother is abducted. The rigid, cliffhanger-heavy chapter structure is supported by breakneck pacing and constant action. The ending leaves neither storyline resolved.