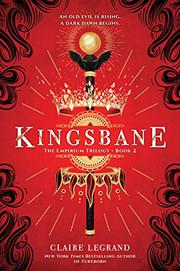 From the Empirium Trilogy series, volume 2

In the sequel to Furyborn (2018), Rielle and Eliana struggle across time with their powers and prophesied destinies.

Giving readers only brief recaps, this book throws them right into complicated storylines in this large, lovingly detailed fantasy world filled with multiple countries, two different time periods, and hostile angels. Newly ordained Rielle contends with villainous Corien’s interest in her, the weakening gate that holds the angels at bay, and distrust from those who don’t believe her to be the Sun Queen. A thousand years in the future, Eliana chafes under her unwanted destiny and finds her fear of losing herself to her powers (like the Blood Queen) warring with her need to save those close to her. The rigid alternation between time-separated storylines initially feels overstuffed, undermining tension, but once more characters get point-of-view chapters and parallels start paying off, the pace picks up. The multiethnic cast (human versus angelic is the only divide with weight) includes characters of many sexual orientations, and their romantic storylines include love triangles, casual dalliances, steady couples, and couples willing to invite in a third. While many of the physically intimate scenes are loving, some are rougher, including ones that cross lines of clear consent and introduce a level of violence that many young readers will not be ready for. The ending brings heartbreaking twists to prime readers for the trilogy’s conclusion.