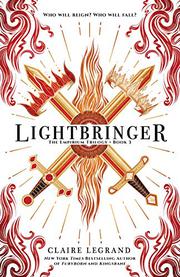 From the Empirium Trilogy series, volume 3

Held captive by the Emperor Corien after Simon’s betrayal, Eliana defies efforts to fully restore Simon’s marque power, which would enable Corien to reunite with Rielle. Eliana’s refusal is met with psychological torture in the form of dreams that feel real and through the suffering of her loved ones. Her torment is finally interrupted by a mysterious voice in her head, which results in Eliana’s greater knowledge of the Deep and the world’s mythology. Meanwhile, 1,000 years in the past, Rielle’s storyline follows her as she, fleeing heartbreak and rejection from Audric (now regretful of his reaction, deposed, and seeking asylum and allies), is dragged deeper into darkness by Corien. Rielle’s storyline leans hard on the love-triangle element. Many of these plotlines (using primary and secondary characters’ viewpoints drawn from the large, unwieldy cast) spin in repetitive ruts so that all of the pieces land in place for a dynamic, flashy final act that unifies the storylines and themes. Race and ethnicity carry no significance in this diverse fantasy world with many secondary characters of color; Corien, Simon, and Rielle are White; Audric has brown skin. Same-sex relationships also have casual, positive representation.

Pacing issues aside, a conclusion sure to satisfy fans of the trilogy.