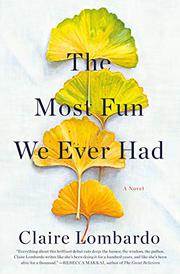 THE MOST FUN WE EVER HAD

Newcomer Lombardo brews all seven deadly sins into a fun and brimming tale of an unapologetically bougie couple and their unruly daughters. In the opening scene, Liza Sorenson, daughter No. 3, flirts with a groomsman at her sister’s wedding. “There’s four of you?” he asked. “What’s that like?” Her retort: “It’s a vast hormonal hellscape. A marathon of instability and hair products.” Thus begins a story bristling with a particular kind of female intel. When Wendy, the oldest, sets her sights on a mate, she “made sure she left her mark throughout his house—soy milk in the fridge, box of tampons under the sink, surreptitious spritzes of her Bulgari musk on the sheets.” Turbulent Wendy is the novel’s best character, exuding a delectable bratty-ness. The parents—Marilyn, all pluck and busy optimism, and David, a genial family doctor—strike their offspring as impossibly happy. Lombardo levels this vision by interspersing chapters of the Sorenson parents’ early lean times with chapters about their daughters’ wobbly forays into adulthood. The central story unfurls over a single event-choked year, begun by Wendy, who unlatches a closed adoption and springs on her family the boy her stuffy married sister, Violet, gave away 15 years earlier. (The sisters improbably kept David and Marilyn clueless with a phony study-abroad scheme.) Into this churn, Lombardo adds cancer, infidelity, a heart attack, another unplanned pregnancy, a stillbirth, and an office crush for David. Meanwhile, youngest daughter Grace perpetrates a whopper, and “every day the lie was growing like mold, furring her judgment.” The writing here is silky, if occasionally overwrought. Still, the deft touches—a neighborhood fundraiser for a Little Free Library, a Twilight character as erotic touchstone—delight. The class calibrations are divine even as the utter apolitical whiteness of the Sorenson world becomes hard to fathom.

Characters flip between bottomless self-regard and pitiless self-loathing while, as late as the second-to-last chapter, yet another pleasurable tendril of sisterly malice uncurls.