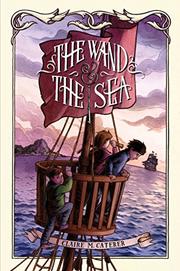 THE WAND & THE SEA

Holly returns to the alternate realm that she can only reach from a holiday cottage.

It’s been a year since Midwesterner Holly first visited Anglielle during summer vacation in England (The Key and the Flame, 2013). Finally she’s back at the cottage, impatient to reach the magical land where she plays an important role that she doesn’t understand. As “the last Adept,” Holly’s “a being of great magical power”—power that she doesn’t know how to wield. Anglielle has an evil king and sorcerer, back story, and an ample supply of fantastical creatures—from Ranulf the centaur to Áedán the salamander, a fire elemental who lives on Holly’s shoulder and protects her. Holly also has a familiar, a black cat who speaks and is “forever loyal to her.” Readers who nuzzle up to these wish-fulfillment animals will happily accept that Holly feels more at home in Anglielle than in suburban America and that she has a “special purpose.” Readers craving solidity will be bored by Holly’s lack of agency and a pervasive vagueness in the rules of magic (which tends to happen “somehow”) and travel (ships sink into the forest floor to reach oceans). Dialect is overdone: “when the veil ’twixt the worlds is thinnest, we’ll call her and she’ll have ter come, innit?” A focus on water (as physical setting and magical element) isn’t enough to wash away blurry worldbuilding and meandering length.