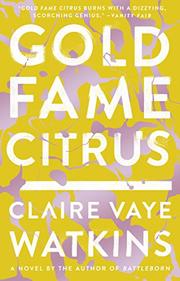 A tour-de-force first novel blisters with drought, myth, and originality.

Watkins drew gasps of praise and international prizes for Battleborn (2013), 10 short stories that burrowed into Reno, Nevada, its history, and her own. Now she clears the high bar of public expectation with a story set in a desiccated future where “practically everyone was thin now.” The callow Luz Dunn, 25, a former model from Malibu, has hooked up with nice-guy Ray Hollis, a surfer and AWOL soldier from “the forever war.” A large swath of the United States has gone “moonscape with sinkage, as the winds came and as Phoenix burned and as a white-hot superdune entombed Las Vegas.” In “laurelless canyon,” the couple squats in the abandoned mansion of a Los Angeles starlet, dodging evacuation roundups. When Luz and Ray stumble across a strange towheaded toddler, they—gingerly—form an ersatz family. But cornered with no documentation, Ray and Luz decide to scoop up the child and hit the road, seeking a rumored desert commune. It doesn’t go well. A sand dune the size of a sea begins barely beyond LA. The little girl keeps asking “What is?”—a device through which Watkins drops clues. On each page she spikes her novel with a ticking, musical intelligence: the title is a list of what drew people to California; an entire chapter hums with sentences beginning with “If she went….” The territory is more alluring and dystopian than Mad Max’s. Watkins writes an unforgettable scene with a carousel; another in a dank tunnel where the couple seeks contraband blueberries. The author freckles her fiction with incantations, odd detours, hallucinations, and jokes. Praised for writing landscape, Watkins’ grasp of the body is just as rousing. Into the vast desert she sets loose snakes and gurus, the Messianic pulse of end times. Critics will reference Annie Proulx’s bite and Joan Didion’s hypnotic West, but Watkins is magnificently original.

The ghost of John Muir meets a touch of Terry Gilliam.