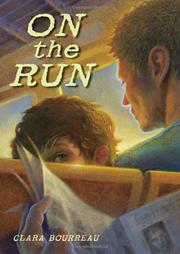 Resentful that he didn’t know his father was in jail, Anthony determines to stick with him after he escapes, running away with him to the seaside at Nantes.

For two years, the third-grader has been receiving postcards from his father’s “travels.” His family thought him too young to be told the truth: His father has been in a detention center awaiting trial. With relatively little emotion, narrator Anthony describes his discovery that both his father and grandfather had been professional burglars, his visits to the jail, the disapproval of his classmates when his father's trial is on the news, and how he joins his fugitive father and successfully conceals his getaway under cover of a fireworks display. In this fast-paced, present-tense account, Anthony’s voice is believably naïve and accepting. At home, he slept with a night light, but by story’s end he’s self-sufficient in the dark. He’s grown, but his father has not. Anthony would like him to return the stolen money, to have a normal life. But his father justifies himself: Banks are insured; he’s never been hurt. Honesty doesn’t enter into the picture. First published in France as En Cavale in 2009, this has been smoothly translated by Maudet.

This glimpse of existential amorality will leave readers with much to think about.