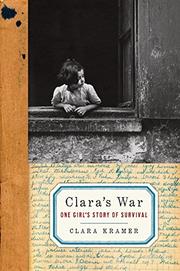 One Girl’s Story of Survival

Besieged Jews are saved by the most unlikely of heroes in Kramer’s Holocaust memoir.

The author was 12 in 1939, when the Hitler-Stalin Pact divided up Poland and the Soviets marched into her hometown of Zolkiew, near Lvov. Her loving, comfortable family was soon broken up by the brutal NKVD, which arrested her grandfather and all other former Polish officers. He probably died in the chaos following the Nazi invasion of the Soviet Union in 1941, which ended the pact and brought even more terrible times to Zolkiew. Abetted by native Poles and Ukrainians, the Wehrmacht, the SS and the Gestapo rousted the town’s Jews from their homes, deported and murdered them. Her desperate father and two neighbors built a crawl space under one of their houses, but then all Jews were ordered to relocate to the ghetto, which they knew meant certain death. Astonishingly, a man named Beck, a Pole who was an ethnic German—as well as a vocal anti-Semite, an adulterer and a drunk—agreed to help them. He requested the home with the crawl space (the Nazis allotted fellow Aryans the property of displaced Jews), spread a rumor that they had fled and hid the beset, disoriented families beneath the floor of the little house. Cramped and crowded, the grimy bunker was just four-feet high until someone dug a hole in which to stand erect. Among the rules—no talking, no complaining. In their burrow, they could hear boots, gunfire, shouted orders and last cries. They heard the trainmen and German soldiers billeted in the rooms above them. Throughout all this, Beck, often with a bottle in his hand, was constant and kind, providing food and protection for a year and a half. Kramer’s sister did not survive. Neither did 99 out of every 100 Jews in Zolkiew. But this surprisingly honorable, truly righteous man saved Kramer and 17 others. The number 18, it should be noted, signifies “life” in the Jewish tradition.

Lucidly told with deeply etched personality sketches, thanks to the author’s use of her teenage diary, now in the U.S. Holocaust Memorial Museum.